While talking on a hand held cell phone or even texting and driving continues to be allowed in many states, our New York State lawmakers consider such distracted driving “twice as bad as drunk driving”. A person who drinks and drives can generally see the road; texting can divert ones attention for 5 seconds or more. For that duration the driver does not see the road at all. Piloting a 2-4 thousand pound machine at 30 MPH for 5 seconds covers the distance of about 3/4 a football field, at 65 MPH that’s 2 football fields in 5 seconds. Lots of activity occurs for which a driver had definitely be alert. Keep your eyes on the road and your hands on the wheel.

Only two other traffic violations carry 5 NYS DMV points: reckless driving and passing a stopped school bus. Reckless driving is a criminal charge, for which the driver’s license can be revoked. It is the unreasonable

interference with the free and proper use of the public highway, or driving which unreasonably endangers users of the public highway. Passing a school bus while it is letting off or taking on children has long been considered a serious violations. Distracted driving – using hand held cell phones or portable electronic devices (PED) has entered that club.

To give a little perspective to the 5 points for a hand held cell phone ticket or even holding your GPS: if you are on the phone, or holding the GPS and then make 2 rolling stops through stop signs (3 points for each), you will lose your driver’s license right there in one traffic stop [eleven points results in license suspension for at least 30 days – usually more]. Another case is if you are going 61 MPH in a 40 MPH zone (like many people on the FDR in Manhattan) and you are talking on your cell phone, 6+5=11 and you will be taking the subway.

Younger and/or newer drivers are treated more strictly. Even a first time offense for a hand held cell phone or a PED will result in a 60 day suspension for drivers with permits and probationary or junior licenses.

Catch this: the presumption is that if the phone is up to your ear, or you are handling your PED, you are “using” in the eyes of the Law.

It’s not easy for police officers to spot drivers who are texting. Their smartphones are down on their laps, not at their ears. And they’re probably not moving their lips. That’s why New York has given the State Police 32 tall, unmarked SUVs to better peer down at drivers’ hands, part of one of the nation’s most aggressive attacks on texting while driving that also includes steeper penalties and renaming rest areas as “texting zones” on certain highways.

What is considered distracted driving? take a look at what the DMV has to say: http://www.safeny.ny.gov/phon-ndx.htm

One upstate court dismissed such a PED ticket where the driver was only checking the time so she “would not be late for work”. PEOPLE v. RIEXINGER, 40 Misc.3d 623 (2013). Using a cell phone while stopped at a red light has considered by many police departments (and many judges and prosecutors) to be a violation of New York’s cell phone law. Recent changes to the cell phone law now specifically prohibit commercial truck drivers from their hand held cell phones while stopped in traffic, and severely limited the definition of permitted use of a “hands-free mobile telephone”. (See DMV’s see cell phone rules at http://www.dmv.ny.gov/cellphone.htm) 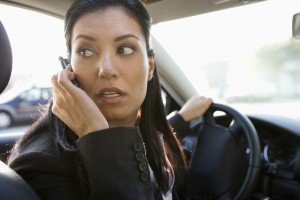 If you have a Learner Permit or a Junior License and you are convicted of driving while operating a hand held cell phone or a portable electronic device you can face a suspension of the driver license or permit for 60 days, and a second such conviction within six months will result in a revocation of at least 6 months of a probationary license, or a revocation of at least 60 days for a junior driver’s license or learner permit.

No matter what you claim to have been using the cell phone for and even if you do have a legally valid reason to use your cell phone, if a police officer sees a cell phone to your ear while driving he has probable cause to assume that you are talking on your phone, or if you have a PED in your hand the presumption is that you are using. Therefore it is necessary to take the discussion into the Courtroom and present your case to the judge, through your attorney. Many of the laws pertaining to cell phone and PED use are largely disputed between traffic ticket defense attorneys and the state’s prosecution. Being that the cell phone and PED laws are so new, the higher appellate courts have not had much of a chance yet to rule on these matters.

Attorney Zev Goldstein has over 30+ years of experience guiding clients through  complex traffic laws and violations. Often it will not be required that you come to Court. It is important for you to have an attorney who understands the development of the traffic law to defend you against cell phone and PED charges as well as other and new traffic violations. If you have further questions regarding